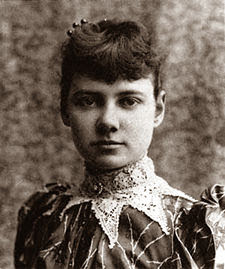 On this date, November 14, 1889, Nellie Bly began her world record setting trip, traveling around the world in only 72 days. She was inspired by Jules Verne’s story Around the World in 80 Days, and proposed to her employer, Joseph Pulitzer, that she try duplicating the stunt for her newspaper, The New York World.

Bly, born Elizabeth Jane Cochran, was the prototype of the independent woman: "one tough broad" in newspaper parlance.

After traveling to Mexico and attacking the Mexican government for corruption in a series of stories, she returned to the United States and moved to New York, where she eventually found a job with Joseph Pulitzer's World. She covered women's rights issues but also specialized in investigative stories. In fact, she's often credited with inventing the practice of investigative reporting.

Bly exposed horrific conditions at mental institutions by getting herself committed to the Women's Lunatic Asylum on Blackwell's Island.

Committed to the Blackwell's Island Insane Asylum, Bly experienced its conditions firsthand. The food—gruel broth, spoiled meat, bread that was little more than dried dough—she found inedible. The inmates were made to sit for much of each day on hard benches with scant protection from the cold. The bathwater was frigid, and buckets of it were poured over their heads. They were then told to stand in a line to drip-dry. The nurses were rude and abusive, telling the patients to shut up and beating them if they did not. Speaking with her fellow residents, Bly was convinced that some were as sane as she was.

Her employer petitioned for her release ten days later, and she wrote a scathing review which led to a grand jury investigation and changes in the asylum system. Read more on Bly’s amazing journalistic career at Wikipedia.
Posted by Miss Cellania at 11/14/2007 09:48:00 AM