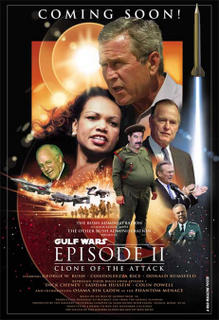 I didn't think it would be this soon, but the links and jokes just keep rolling in. Time to make some fun at the expense of POTUS. Here's a webpage entitles The Bush Family Arrest and Detention Survival Guide. An explanation of Why We Invaded Iraq. Bill Maher on a Bush Recall (among other subjects) and a Daily Show segment on the Bush/Katrina Timeline. Then you may enjoy the music video of the song "Asshole", an update of an earlier video to the same song, with fresh images. (Thanks, Kris!) And for you shoppers, here's the "Dishonest Dubya" Action Figure. Worth keeping around just for the dumb phrases. (Thanks, Anne!)

The Nobel Prize committee today announced that President George W. Bush has been under consideration for an unprecedented six Nobel prizes this year:

Economics, for cutting taxes on the rich and helping more people
into poverty;
Physics, for his astute observation that no one could have
foreseen the breach of the levees in New Orleans;
Medicine, for his plan to send the Army into the streets of
America to fight the Avian Flu;
Chemistry, for the obvious chemistry that exists between him and
his nominee for the Supreme Court;
Peace, for sending Karen Hughes to tell the women of Turkey that
waging war promotes peace; and
Fiction (to be shared with Colin Powell,) for his 2003 State of
the Union Address.
(Thanks, Ed from The Tao of Politics!) 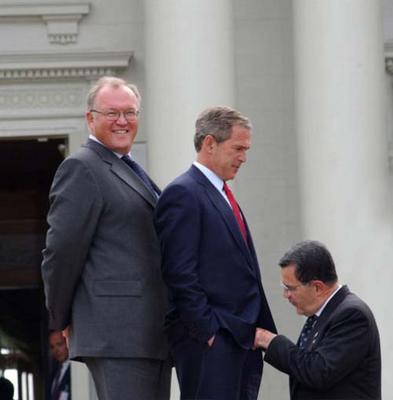 This just screams for a caption contest, but I'm sure its been done.

(Update: Carl has one up now, at Simply Left Behind.)

A man died and went to heaven. As he stood in front of Peter at the Pearly Gates, he saw a huge wall of clocks behind him. He asked, "What are all those clocks?"

St. Peter answered, "Those are Lie-Clocks. Everyone on earth has a Lie-Clock. Every time you lie the hands on your clock will move."

That's Nelson Mandela's. The hands have never moved, indicating that he never told a lie."

"Incredible, " said the man. "And whose clock is that one?"

St. Peter responded, "Bush's clock is in Jesus' office. He's using it as a ceiling fan."

Maybe it was churning margaritas in His blender?

(Thanks, Carl from Simply Left Behind!)

The U.S. Postal Service has created a stamp with a picture of President George W. Bush, to honor his achievements.

However, in daily use it has been shown that the Bush stamp is not sticking to envelopes. This enraged the President, who demanded a full investigation. After a month of investigation and testing, a special presidential commission has made the following three findings:

1) The stamp is in perfect order.

2) There is nothing wrong with the applied adhesive. 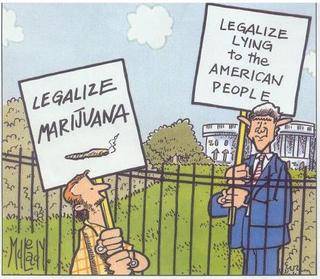 3) People are spitting on the wrong side.


Preiously on Miss Cellania:
Dubya,
Hu’s on First,
And a letter to President Bush on this post.


Misscellania definition
Politician: One who shakes your hand before elections, and your confidence after.

Thought for today: Politics is supposed to be the second oldest profession. I have come to realize that it bears a very close resemblance to the first.
Posted by Miss Cellania at 10/12/2005 04:58:00 AM

OK OK, the caption contest can be found at
http://simplyleftbehind.blogspot.com/

Is this pic photoshopped?

I can't swear to it, but I don't think it is. I've seen it at several sites over the last year or so, and it never looks any different.