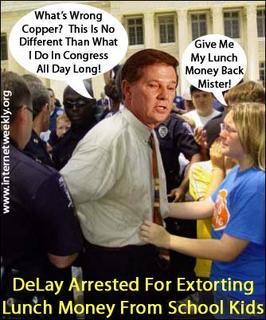 Texas Congressman and House Majority Leader Tom Delay is in trouble, so that gives us a fine opportunity to make jokes. To get you up to speed, incase you’re not a political junkie, here’s the short version, and here’s an update. So hard to believe our duly-elected leaders would actually do something ILLEGAL involving MONEY! Not nearly as entertaining as Clinton’s sexcapades, or dire as Bush’s various wars, but just good enough for a few laughs.

Tom Delay is called The Hammer.

Tom DeLay spends his time on television denying the conspiracy indictments filed against him in Austin. His prospects are being analyzed by everyone. Astrologers looking at his chart concur that his house is in Jupiter and his moon is in a sling.

1) "I AM the federal government." –Tom DeLay, to the owner of Ruth's Chris Steak House, after being told to put out his cigar because of federal government regulations banning smoking in the building, May 14, 2003

2) "So many minority youths had volunteered…that there was literally no room for patriotic folks like myself." --Tom DeLay, explaining at the 1988 GOP convention why he and vice presidential nominee Dan Quayle did not fight in the Vietnam War

3) "Now tell me the truth boys, is this kind of fun?" –Tom Delay, to three young hurricane evacuees from New Orleans at the Astrodome in Houston, Sept. 9, 2005

4) "We're no longer a superpower. We're a super-duper power." –Tom DeLay, explaining why America must topple Saddam Hussein in 2002 interview with Fox News

6) "Guns have little or nothing to do with juvenile violence. The causes of youth violence are working parents who put their kids into daycare, the teaching of evolution in the schools, and working mothers who take birth control pills." –Tom DeLay, on causes of the Columbine High School massacre, 1999

8) "I don't believe there is a separation of church and state. I think the Constitution is very clear. The only separation is that there will not be a government church." –Tom DeLay

9) "Emotional appeals about working families trying to get by on $4.25 an hour [the minimum wage in 1996] are hard to resist. Fortunately, such families do not exist." –Tom DeLay, during a debate in Congress on increasing the minimum wage, April 23, 1996

Source links for the above are available here.

A Rep whose name is Tom DeLay,
He breaks the rules most ev'ry day.
He don't respect the law,
Thinks ethics are a bore.
'Tis time to show him crime don't pay.

Tom practices dishonesty.
Ignores the law with joy and glee.
Misused the FBI,
Golf junkets on the sly,
How 'bout we stop his crim'nal spree.

Tom helps the rich and harms the poor.
He should not be a Rep no more.
To those who'd right his wrongs,
I dedicate this song.
It's time we show DeLay the door.

The man has caused a Texas mess,
With scheming done at his behest.
Eradicates his foes,
And everywhere he goes,
Treats Democrats like evil pests. 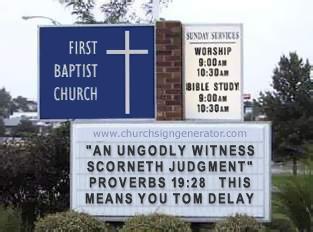 The right to die with dignity,
He flouted with iniquity.
A self-appointed God,
On state law ran rough shod.
Let's jail him for eternity.

Check out this and more political humor at Madeleine Kane’s website.

Cellania, thanks for the invitation to your blog. Your DeLay stuff is great! And the vacation photos are a hoot!