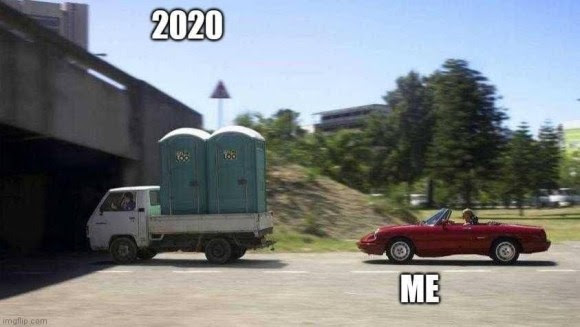 While 2020 has been an awful and momentous year for everyone, the pandemic did not impact me personally as much as other people, because I live alone and already worked from home. But it was a big downer for my kids, who were looking forward to a big ceremony upon graduating from college. Instead, they were sent home March 13th to finish classes online, had no commencement, and got their diplomas in the mail. I am still exceedingly proud of both Princess and Gothgrrl on attaining their bachelor's degrees.

The big event that changed my life this year was my mother breaking her hip. Suddenly, I'm in charge of her life (along with my brother and SIL). We weren't about to leave her in a nursing home any longer than we had to, and it's dangerous to bring too many strangers around, so the family has been caring for her at her home, about 20 miles from mine. Ten months later, she has made quite a lot of progress in recovering, but still needs a walker and cannot cook for herself, so my SIL and I split our time staying with her, with help from brother Bill and her granddaughters when they are available. That makes keeping up with blogging a lot harder, and I've slipped somewhat in those duties. But I managed to experiment with all this hair that hasn't seen a salon in over a year. 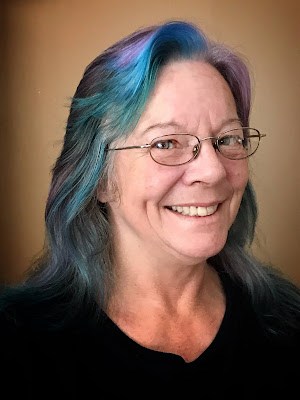 It was a weird year professionally, too. Early in 2020, I was "ghosted" by Considerable. They just stopped responding to my emails. I eventually figured out that my boss must have been let go and he may have been too traumatized, and then later embarrassed, to let me know. At least that's the most charitable assumption I can muster. I struggled financially, but it was a blessing in disguise because I was quite busy with Mom. I managed to keep up with Neatorama, but I wouldn't have had the time for longform writing. And recently I joined Boing Boing, so things are looking up!

The pandemic summer was a long one. My garden didn't produce much compared to other years, mainly because I didn't put in the necessary time. I had three unemployed college graduates living with me: my two daughters, and an international student who eventually got a job with a biotech lab in Cambridge. Gothgrrl started veterinary school in August, and seems to have taken to it like a duck to water. Princess got a job and a cat and an apartment about two hours from here.

Another thing that happened was that I lost my sweet baby Frisby last spring under horrible circumstances that I don't even want to write about. The situation was exacerbated by the lockdown and Mom's hospital stay, and I didn't have a chance to properly mourn until much later. She was only a year old. I won't get another kitten for the foreseeable future. The three cats I have will have to do.

As 2020 draws to a close, I am exceedingly happy that we have a new administration coming in to Washington, although I know it will take quite some time to undo the damage that the current administration has done to our country. I am also truly thankful for covid vaccines -if only everyone could get them before they get the disease. I'll keep praying about that.

I hope things are also looking up for you, and that 2021 will bring you health, happiness, and blessings!

YOur blog posts always give me something to laugh and and something to think about, Miss C. Thanks for your commitment and your creativity! Hope the New Year gives you and everyone else a bit of cheer.

Best wishes for a good 2021 for you and your family.

nice, except the next administration you are looking forward to are the real enemies of the state.

I have followed you forever (Presurfer days) and so grateful for your continued addictive output of thoughtful, skillfully assembled, often quirky, often heartwarming, and uniquely humorous content. This is one of my bookmarked 'blogs' to check daily since I deleted facebook. Thank you for being you, and sharing with us :)

And as always thanks for making us GenXers look good!

All the best in the new year. 2020 was far too much like the old curse "May you live in interesting times".

I hope things improve for you and that your country manages to get out of the weird place it finds itself in.

Just a note to tell you how much we appreciate your work. Your blog is the first site I look at each morning (after the mail) and it is a grand start to my day. Best of luck to you in 2021- with your wits, intelligence and strength, you should get through it brilliantly.

Thank you for blog, I have followed you 4ever. Bless you (and your family) for taking such good care of your mother after her hip break. Thank goodness you were able to get her home! You should be very proud of your kids! I had a graduate in my family this year too. No ceremony but luckily, a job was waiting.
May 2021 bring peace and prosperity to you and yours.

Happy New Year ... I hope it will be better for you and for all of us than the last one. Once we're rid of Der Furor, it may be!

I've started every morning with you for years, always grateful for your humor, intelligence, and courage (it definitely takes courage to post political stuff). I appreciate, too, that you share a bit of your own life --- it makes the connection more real. Thank you for lightening my days. Wishing you peace, health, and lots of laughter in 2021.

blue skies to you,
Laura

Thanks for all your great work, I hope you have a prosperous and healthy 2021

I have a question ?
Why in the hell are Kentuckians still voting Mitch McConnell into office ?

Good luck in the New Year !

Wowzers! Love the hair! Miss C, one of the things I love about you is that you always see the good side/bright side of things- yes, things might be bad, but they could always be worse. You have an open mind, and an open heart. I wish you nothing but success, love, and prosperity in 2021!

Sometimes I think you've got some prior military in you Miss C as you've obviously learned to "roll with it." You're surrounded by friends and family and I'm thinking 2021 will be much kinder. Looking forward to another year of great posts. And salons are overrated, keep the hair. New woman for a new year. Best of luck to you.

Hoping 2021 is much better for you, your Mom, your girls and your cats!

This nation has some dark times ahead in the near future, but yes, we have some positive news for the new year!

Your output continues to be awesome, and I am so glad you continue. Blessings to you and your family!

Happy New Year Miss C.. Your blog is my first stop every morning to start my day. Love the hair! Now change your profile pic out with this one. It makes you look years younger..... and sexier. ;-)

This is literally the first blog I visit every day, you're among the best. The humor and insight you bring is especially amazing given the year that you've had. Cheers to a new and better year ahead!