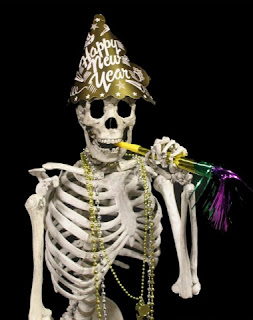 Did you hear what the dyslexic Highway Patrolman did on New Year's?

He spent the whole night handing out I.U.D.'s

Carl's New Year's Eve party was an annual occurrence with numerous guests arriving.  During the evening, a man knocked on the door, was greeted heartily although no one knew who he was, and was led to where the drinks were, in the kitchen.

He sat there happily, chatting away, for a couple of hours before a strange light dawned on his face.

'You know,' he confided to Carl, 'I wasn't even invited to this party.  I just came over to tell you that some of your guests' cars are blocking my drive.'

He continued, 'My wife's been sitting out in the car waiting for me to get them moved, so that we can go out.'

Sally was taking an afternoon nap on New Year's Eve before the festivities. After she woke up, she confided to George, her husband, 'I just dreamed that you gave me a diamond ring for a New Year's present. What do you think it all means?'

At midnight, as the New Year was chiming, George approached Sally and handed her small package.  Delighted and excited she opened it quickly. There in her hand rested a book entitled: The Meaning of Dreams.
Posted by Miss Cellania at 12/31/2020 12:00:00 PM

Hahahahahaha, that last one!

Ain't no one going to bed early tonight.