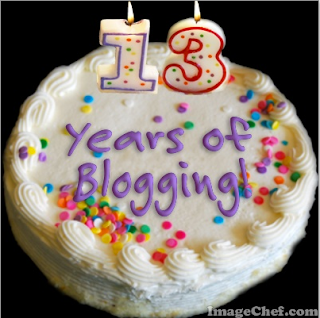 I used to post about the anniversary every year, but it eventually got away from me, and several years I missed it by a day. While August 23rd sticks in my mind, the first post on Miss Cellania was actually on August 22, 2005. Thirteen years is a long time for a personal blog, although nowhere near a record. The story of how it all came about was in the last blogiversary post three years ago, which I also missed by one day.

There are 24,974 posts here, some of which have yet to be published. There would have been thousands more if I hadn't have migrated to Squarespace and back- I still have the data for all those missing posts, but they are formatted for Wordpress and won't post on Blogger. Come to think of it, they wouldn't post on Wordpress, either, because I tried that. I have occasionally reposted some of them manually, but just dipping into those huge files is a pain that I've mostly put off. For years I watched Sitemeter, as it approached ten million pageviews. I was planning to post something special for that milestone, and I almost got there when Sitemeter went out of business. So I started paying attention to Blogger's stats, which had me exceeding ten million pageviews long ago. Oh, well.

Starting this blog all those years ago led me to a career in blogging for a time. I wrote for YesButNoButYes, which ended in 2010, and Mental Floss, which scaled back my duties and pay, and Neatorama, where I was managing editor for years, but cutbacks there meant the entire staff was laid off this last spring. I was then re-hired to post a bare-bones version so the site can hang on until the financial situation improves -if it ever does. So now I am truly part-time and looking for more work. The prospect of punching a clock after years of working from home terrified me, but I applied for jobs around town. However, it turns out that no one wants to hire a almost-60-year-old woman with few local contacts and little relevant experience. So I'm caught in a zone between employability and retirement, as I still have a mortgage and seven years to go before Social Security kicks in.

I am glad to still have my personal blog, which has always been a hobby and an outlet, but also a bridge to meet wonderful people on the internet. Thanks to all of you who come by, who comment, and who make it all worthwhile!

Congrats Miss C!!! I can't start my day without checking your blog. It has become part of my morning routine. Thanks for sharing your warped world view with us (me). It's nice to know that the "serious people" don't have control of everything. I look forward to reading your stuff for at leas 13 more years! Keep up the good work.

Another regular reader here--love the variety of posts. Thanks for your good work!

So glad you're here and surviving! I read you every day.

Thanks for being here. I read most every day.

Hey Miss, loyal reader here. Thanks for all the years. I, too, check in every day.

One of the first things I do every morning after making coffee, slugging down a mug and feeding the cats, is to bring that second mug of coffee over to the desktop with the big screen and check out today's links from Miss Cellania. Okay, first thing I do is see how many people looked at MY blog the day before, but the very next thing I do is check YOUR blog. Hope you continue to be an important part of my morning routine.

Congrats on 13 years AND on 2 smart girls doing well! I had a similar issue with job hunting in my 60's...there is definite age discrimination rampant. Why train you for 5 years when we will only get 7 back? And she persisted! As the meme says, CHIN UP, Princess, OR THE TIARA FALLS. But maybe that was only intended for your daughter? hugs, drgeo

Congratulations on 13 years- seems like I've been poking my head in for most of that time! Seriously consider a service like Patreon... I for one would be happy to throw a fiver your way each month for the ability to be entertained each morning. And those fives (or ones, tens, who knows?) will add up quickly.

Happy Blogiversary Miss C! It's been a pleasure reading your posts over the years. I'm missing so many old school bloggers and am glad that you've hung in!

Your blog has amused me for years. Congrats!

Been reading you for years and years! Always check in and enjoy your posts. Sorry to hear the internet employment is not treating you kindly.
Hope better things come your way soon.
Happy 13th!

Thank you for cheering me up every morning (and I admire that you have two wonderful daughters). I too would send you $$ every month if you set up a Patreon.

I don't know about Patreon, that is supposed to be for artists and real creative people. And they keep a portion.

It's pretty easy to send a gift by PayPal to radiofox@gmail.com if you really want. Many have suggested putting a tip jar on the page, but so far my pride gets in the way.

I love your blog Miss Cellania. Please don’t ever leave us.
Hugs!

So glad that you are still around after all these years. There was a hole left in my internet heart after Kev from Nothing To Do With Arbroath passed away. This blog filled that void. My facebook friends think I am some sort of humor genius, but truthfully at least 20% of my funnies comes from right here. Thank you for all of the giggles and thought-provoking and downright fascinating articles you post. I wish you the best on job-hunting!!!

Thanks for making my mornings for so many years. A day without Miss Cellania is like a day without sunshine.

May God bless you.

Thanks so much for all the fun internet randomness all these years...

I know virtual hugs from anonymous people on the internet don't pay the bills, but you're very much loved and appreciated :)

"I don't know about Patreon, that is supposed to be for artists and real creative people. " Wow. You really don't see yourself as a creator? You need to work on that self-esteem. In any case, lots of people who have sites like yours use Patreon. I'm not sure why but nobody wants to use Paypal to support sites they like.

So, I'm seconding the Patreon suggestion.

Also, thanks for the site--I look at it every day--it is a really nice antidote to all the craziness going on in the country these days. I often forward the fun links I find on your site to my kids.

A Happy 13th Birthday to your blog - thank you for all your wonderful posts.

I love reading your blog and really can't remember when I started. I too blog and have for over 10 years. But nothing like this - here's hoping you find your next paying career

I've been a fan for all these years and can't imagine a day without MissC. We've watched you go through much (can't believe your girls are grown!) and hope you continue to share all this. You have a great writing style so I envision you continuing to have a career in 'wordsmithing'. Thanks for keeping us entertained these years and hope to keep seeing your blog evry day.

In another life I used to blog on Dump Trumpet for a little while so I know that 13 years is some achievement. As to how good you are, although life put paid to my blog I still read yours, Miss C. More power to you. m0le

Thanks for the kind words, everyone!

Miss C, nothing but respect: you've lead a aging baby boomer through the perils of the internet and I thank you. Here's to many, many more years.

>> I don't know about Patreon, that is supposed to be for artists and real creative people. And they keep a portion.

Curation is valuable. And right now you're keeping 100% of nothing ;)

I'd become a patron.

Congrats Miss C. Can’t quite remember when I started
following your blog – 2006 or 7? I do remember how though.
I was a regular over on Mental Floss and YBNBY and read all
your stuff. There was a discussion where you mentioned,
“Yeah I got a blog, but I’m thinking of stopping because no
one reads it.” Something like that. I knew you had it, but. .
guilty. So I came over. Little did I know what I was
getting into – hee hee. That’s OK – I’m in for as long as
you’re able to publish. Keep up the good work and
brightening all our days.

Congratulations, Miss C - and we love you! Thanks for the occasional shout out and keep on blogging!