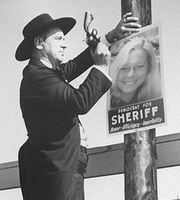 An Ancient Egyptian Pregnancy Test Survived Millennia Because It Worked. It didn't accurately predict the sex of the child, however.

How (or How Not) to Build a Labor Movement. George Pullman built a town for his railway workers, but they had others concerns.

30 Creepy Bad Album Covers. Some are misguided, others are low quality, and many are just plain bizarre.

If Trump shot Michael Cohen in broad daylight, here's what Republicans would say.

Simone Biles's Skills Are Even More Mind-Boggling In Very Slow Motion. Grace, power, and strength can apparently overcome the laws of physics.

DNA from Two Human Species Discovered in 90,000-year-old Bone. A small bone fragment came from a girl with a Neanderthal mother and a Denisovan father.

The Macabre Art of Baking People Pot Pies. Ashley Newman's latex pies and Andrew Fuller's edible pies both stare at you from beyond the grave.

A blast from the past (2014): Survival Kits: The Useful, the Cool, and the Ridiculous.