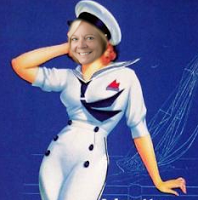 The Real Case that Gave Poe a Murder Mystery.

Time Trap: How Escape From the Planet of The Apes Was Ahead of Its Time. It was a lesson in how to make a sequel for a world that was destroyed.

Actors who didn’t survive their last TV roles. TV series handle the death of a regular in several different ways.

Flappers Didn’t Really Wear Fringed Dresses. That idea came from the movies made about them later.

Interesting tidbits behind famous album covers. You've probably owned at least of couple of these.

The Oral History of Celine Dion's "My Heart Will Go On." That it worked was a real surprise to almost everyone involved.

The animal rescue group Cat People of Melbourne produced an article describing one of the cats they have available for adoption. There is no false advertising for Mr. Biggles, "an utter utter utter bastard."

How the Wealthy Talk to Their Children About Money. The rest of us teach our kids how to take care of themselves. (via Metafilter)

These Are History’s Most Notorious Liars.