Today is the 75th anniversary of Executive Order 9066, issued on February 19, 1942, which allowed the U.S. government to inter Japanese-Americans, German-Americans and Italian-Americans in camps for the duration of the war. Around 120,000 Americans of Japanese ancestry were removed from their West Coast homes and taken to internment camps. The above government newsreel was made in 1943. The dialogue sugarcoats the entire experience, while the visuals tell a different story. I was struck at the 7-minute mark, where internees were taking an "Americanization" class, and the camera focuses on three women students who look as if they'd spend their entire lives being American. 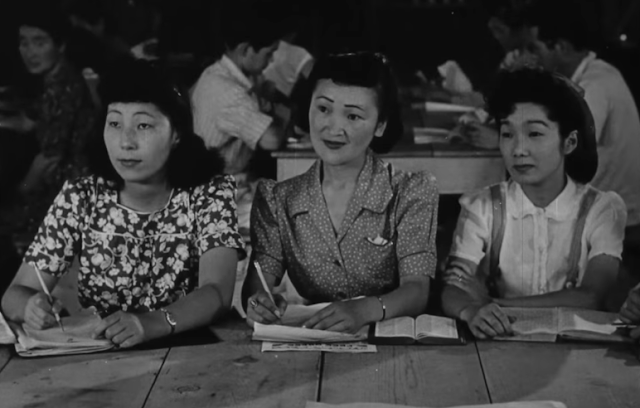 At the National Archives' Unwritten Record Blog, you can read about the internment project and see an 18-minute 1944 color documentary.

At The New Yorker, you can see Bill Manbo's rare color photographs of his internment camp.

At NPR's Code Switch, you can see photographs of the internment from three different photographers which very different agendas: Dorothea Lange, who wanted to convey the unfairness of the order; Ansel Adams, who depicted the internees as patriotic and cooperative volunteers, and Toyo Miyatake, who was himself an internee.

I suggest you go to https://en.wikipedia.org/wiki/Niihau_incident, and see why this executive order came to be.