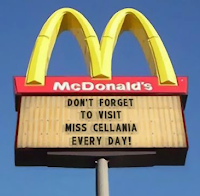 Pioneer comedian Phyllis Diller died yesterday at age 95. If you're not familiar with her schtick, be thankful there are plenty of recordings like this 1969 clip of Diller with Liberace.

Forrest Fenn is a real-life Indiana Jones character, except much wealthier. His bizarre scheme to turn his own burial into a treasure hunt may bring him more fame than anything else he's done.

Any Day Is A Good Day For A Bill Murray Tribute Remix. It's bouncy, nostalgic, well-edited, and contains language that is NSFW.

The Mississippi River: The Backbone of America. Providing water, transportation, and blues songs to us for hundreds of years.

Primrose the donkey was born prematurely, and her legs weren't developed enough to hold her weight. But bright pink casts stiffen them so the tiny donkey can walk.

College Humor is teaming up with Malaria No More to stomp out malaria. Their weapon is a $1 pay-per-view comedy show called Malarius, featuring some big names in entertainment.

Forget the product; read the reviews of this banana slicer. (via Metafilter)

3 Reasons Why Fifty Shades of Grey Deserves Its Own Video Game.

Losing One’s Head: A Frustrating Search for the ‘Truth’ about Decapitation. Warning: may induce nightmares. (via Ed Yong)

The banana slicer link is priceless!