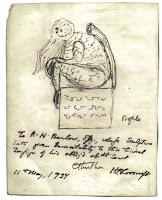 Curiosity's Landing, From the Perspective of the 3,000 People Who Helped Build It.

The condom industry in America went underground after the Comstock Act of 1873 outlawed the sale of contraceptives by mail. People still bought them, but advertising had to be very creative to get around the law.

In 1955, geneticist Helen Spurway wanted to know if parthenogenisis, "virgin birth," happened in humans. She found Emmimarie Jones, who had an 11-year-old daughter with no known father. (via Not Exactly Rocket Science)

Jackmeoff Mudd Arrested In Fort Lauderdale. Don't skip the slideshow of other strange names on arrest reports. (via Fark)

The British feline charity Cats Protection named Jessi-Cat their Cat of the Year. Jessi-Cat's owner, 7-year-old Lorcan Dillon, has an anxiety disorder called selective mutism, and Jessi-Cat was just the therapy he needed. (via Arbroath)
Posted by Miss Cellania at 8/20/2012 02:00:00 PM

RE: VIRGIN BIRTH
So, if parthenogenesis is a real possibility in humans, that means that Jesus must have been a woman. No?