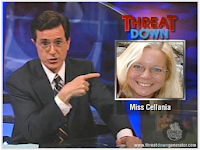 Hanging 20 With the Surfing Dogs of San Diego!

How do we know someone is no longer alive? (via Not Exactly Rocket Science)

The 5 Biggest Pussifications of Schools.

According to the Institute for Economics & Peace, the most peaceful country in the world is Iceland. Denmark is nice, too, but Somalia is still a scary place, coming in dead last.

Can Coolness Be Studied Like a Science? Well, maybe, but trying to figure it out makes you uncool to the max.

Channing Tatum's movie Magic Mike is about male strippers, supposedly based on his own experience. But his former co-workers saw a preview and are accusing Tatum of using their stories instead.

Fun tip: Suspend a drink cup in mid-air and see what reactions you get. People who work at drive-through windows are especially impressed and glad to see something out of the ordinary.

Images of new sneakers from Adidas were leaked to Facebook, and the reaction is mainly "what were they thinking?" Well, would you wear tennis shoes with shackles attached to them?

10 U.S. athletes to keep your eyes on at the London Olympics. Oh yeah, Michael Phelps is back, leading a crew of newcomers ready to dazzle the world.

13 Curious Clauses in Baseball Contracts. If you're ever recruited, don't forget to ask for an allowance for mustache wax!
Posted by Miss Cellania at 6/19/2012 07:00:00 AM