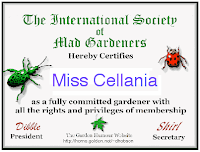 The Mighty F Blog is a blog that deals with all kinds of subjects: food, fun, foreign policy, fungus ...as long as it starts with an F. The official mascot of the site is the Fennec fox. There's also a map in which you can explore F places and submit your ideas for more.

Alan Philipson wrote about the final night that the public was able to enjoy the Snow White's Scary Adventures ride at Walt Disney World before it closed to make way for new construction. Events led to his son Ben being the very last person ever to ride the attraction. (via mental_floss)

Obsolete media technology is still a collection of data that can be retrieved. Watch as reel-to-reel tape is played with a credit card reader and an iPod Touch.

Twenty years after the L.A. riots, the victim of the beating that started it all has died. Rodney King was found dead at the bottom of his pool.

Camera traps are hidden in the forest to record wildlife without disturbing their natural behavior. But some folks think they should be clearly labeled after one caught an unnamed Austrian politician having sex on film.

The Olympics open in London in only six weeks. Will the parade of athletes be as entertaining as the ones with these 12 Ridiculous Olympic Team Outfits?

Batman Blows His Cover. The perfect example of someone who's already in a hole and just keeps digging.

Southwest Airlines is becoming the "Soup Nazi" of carriers. Here are eight stories of people who have been kicked off flights for dubious reasons.

5 Drinking Stories That Put Yours To Shame. If you want to get into the history books, nothing succeeds like excess.
Posted by Miss Cellania at 6/18/2012 07:00:00 AM