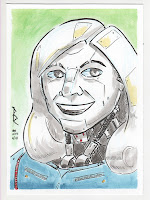 The Google X laboratory unveiled an artificial intelligence computer that can learn new concepts from raw data on the internet. The first thing it taught itself was how to recognize a cat.

How To Make a Viral Hit in Four Easy Steps. This one hit where it hurts, because I always credit reddit and still get criticized for using "their stuff."

Does It Matter If the Heroine of 'Brave' Is Gay?

Unless you think you deserve that hangover as punishment, you'll do anything to make it stop. That's where science comes in.

John Edwards and Rielle Hunter's relationship survived through many overwhelming obstacles -until her book was published. There are lessons we can all learn from this affair.

Every student wishes that their teachers could be as cool as the teachers in movies and on TV. The bad news is, in real life those teachers would never be awarded tenure.

The Truth About Lie Detectors. Even more interesting than the history of the instrument was what its inventor did next.