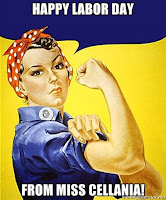 Happy Labor Day! Mental Floss looks back at how this holiday came about.

Top 10 Labor Day Conspiracies. Working people find no end to those who want to divide and exploit them. (via Fark)

Death in the Workplace. (via the Presurfer)

Ten Things Everyone Should Know About Time. Number 11: Time flies like an arrow. Fruit flies like a banana.

Freddie Mercury would have been 65 years old today if he hadn’t died in 1991. Google Doodle pays tribute with an animated video.

George Lucas is altering the Star Wars trilogy yet again for the Blu-Ray release. This is exactly the kind of thing Lucas preached against before he got the opportunity to do it himself.

America ranking among countries of the world is slipping in a surprising category: infant mortality. There’s no deadly epidemic, but other nations are improving faster than we are.

The Extraordinary Lives of the World’s Tallest People. They can’t hide, and they didn’t ask for the attention.

NASA issued a press release to remind everyone that the movie Apollo 18 is fiction and not a documentary. They needn’t have bothered, since film critics are recommending you don’t see the movie at all.

Ten Strange Places People Live. They look like pretty nice homes, except for the ones from which you could plunge to your death. (via the J-Walk Blog)

Scientists are working on the possibility of sunscreen we can take in a pill. Coral and other creatures in Australia’s Great Barrier Reef produce chemicals to protect themselves from the sun, which might work for humans, too.