Links for Enjoyment and Fun 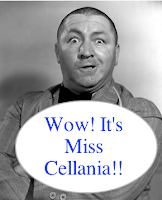 Andy Samberg meets Pee-Wee Herman in a bar. This leads to two assaults, an intervention, and the most amazing Breathalizer test you’ve ever seen.

Mini muffins are delicious! However, if you aren’t hungry, they can be oh so annoying. (via Everlasting Blort)

Encounter. A 1982 stop-motion film explores the question of how aliens would have been received in medieval times.

The Big Bump. When this girl recovers from her shock and graduates, she’ll run for city commissioner on the platform of fixing potholes.

The Evolution of Famous Dogs.This handy chart shows where they came from, and where things started to go horribly wrong.﻿
Posted by Miss Cellania at 1/19/2011 05:11:00 AM