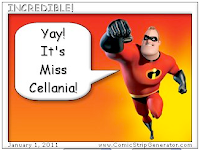 A Blind Date between pi and e. The relationship between numbers can be as complicated as human relationships. Or more.

The U.S. Border Wall is supposed to be difficult to cross, but two young women scaled it in 18 seconds flat. Imagine how fast you could do it with a little planning and a ladder.

Ah, the life of a freelance writer. Naked with My Editor.

Have you ever seen the pilot episode of Gilligan's Island? It wasn't aired until the 90s. The music, actors, and characters all changed before the series started.

Red Square is a classic game that will drive you insane. My best time is about 15 seconds.