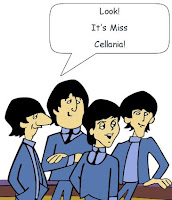 A stay-at-home mom gives “a warning from the front lines.” Making choices between kids, career, or both is harder than ever when your preference can backfire on you years later.

Doctor Who is going to marry his daughter. Sort of. The bride played Doctor Who’s daughter on TV, but she’s also the real daughter of a TV Doctor Who as well. Got it?

8 Terrifying Animal Swarms Created by Human Stupidity. That is Cracked’s way of saying that humans have introduced invasive species to places where they wrecked the ecosystem. Text NSFW.

Once upon a time, women college students learned to take care of babies by living with and caring for a “practice baby” from an orphanage. Too bad no one thought to find out how those babies turned out later. (via Nag on the Lake)

The 15 Most Hated Companies in America. They say these are in no particular order, but I’m not surprised by what was listed first. (via Breakfast Links)

In prison, honey buns are worth their weight in gold. They are used for currency, bribery, and if all else fails, you can eat them.

Upset Specials: 7 Stunners Not Involving Joe Namath, Buster Douglas or Cold War-era Olympic Hockey. Meaning that these might be sports stories you aren’t already familiar with.
Posted by Miss Cellania at 1/10/2011 05:49:00 AM

The show is "Doctor Who". The character is simply "The Doctor"

The article in wikipedia on the Doctor gets quite pedantic about it (even more than I do)
https://secure.wikimedia.org/wikipedia/en/wiki/Doctor_%28Doctor_Who%29#.22Doctor_who.3F.22