Stars of the Wild West Show 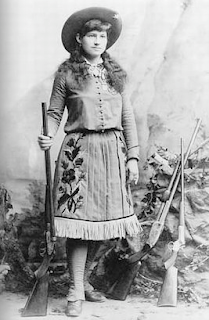 In the latter part of the 19th century, before television, radio, or even movies with sound, traveling exhibitions were the biggest form of entertainment most people encountered. The wild west show merged the entertainment of the circus with the adventure of the new west and brought it to crowds of the eastern US and beyond. The stars of the wild west shows were as famous as world leaders and military heroes -or even more so! Read about the biggest wild west show stars in this article I wrote for mental_floss.
Posted by Miss Cellania at 2/02/2010 08:13:00 AM