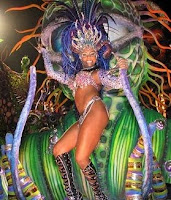 Carnivals Around the World. These events will have different dates, but they'll be celebrated again this (and every) year.

Missile Silo Confessions: Living on the Edge of Armageddon. Lots of photographs and reminiscing from the people who built, manned, and recovered a Titan missile site.

Edgar Parker opened his dental practice in 1892 and found business was not that great. So he took his practice on the road and became "the P.T. Barnum of dentistry."

6 Shockingly Evil Things Babies Are Capable Of. Of course, babies wouldn't consider them evil, just the result of natural selection that made their existence possible.

After years of delays, the world's largest commercial airplane took its first test flight Monday. The Boeing 747-8 will lift almost a million pounds fully loaded into the air when it goes into service, possibly by next year.

An Intellectual History of the Sports Illustrated Swimsuit Issue. It began in 1964, which makes it older than any of the models in this year's edition.

The Top Ten Important Moments in Snowboarding History. The next couple of weeks in Vancouver may add to the list.

Take a POV Tour Of The International Space Station. It's much smaller than you'd imagine from watching movies, but much cooler than any fiction.
Posted by Miss Cellania at 2/11/2010 06:09:00 AM