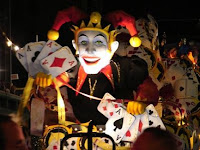 Parade Time in New Orleans. An overview of the different Krewes and their Mardi Gras pageants.

Prince rehearsing in his basement in June of 1984. I wouldn't be surprised if these videos were pulled by the end of the day.

What do you say to a scared little girl whose just had a baby and feels all alone in the world? A young NICU doctor has a few suggestions. (via Metafilter)

"Inuk" is the ninth human to have his entire genome sequenced but unlike the previous eight, he has been dead for some 4,000 years. His DNA tells us about him, his tribe, culture, where he came from, and how he is related to the rest of mankind.

Now Sea This: The 10 Most Amazing Bizarre Sharks. Different species developed weird and oversized body parts because no creature was ever brave enough to criticize a shark over its looks.

We May Soon Be Able to Clone Neanderthals. But Should We? Isaac Asimov took a look at some of the ethical considerations fifty years ago.

A video of Apolo Ohno in training sheds some light on how speed skating is done. It still seems fairly impossible to actually do.
Posted by Miss Cellania at 2/16/2010 06:05:00 AM