Hadacol, the Last of the Medicine Shows 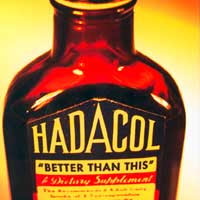 Advertiser-supported entertainment is nothing new. Since medieval times, people could see free entertainment right in their hometown as long as they listened to a sales pitch for dubious remedies along with the singing, dancing, and side show acts. Sales of snake oil and other patent medicines paid for the show and then some. Like other forms of traveling entertainment, the medicine show lost its luster when people gained the opportunity to go see movies instead. The medicine show had one last hurrah during the 20th century in the form of Hadacol. Read the story of the last great medicine show in this article I wrote for mental_floss.
Posted by Miss Cellania at 2/09/2010 12:02:00 PM