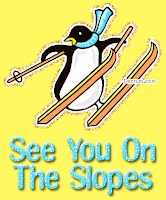 How animals participate in the Winter Olympics.

Oh, you're invited to the Valentines Day party, but you can't express any affection. Burbia gives us another reason to avoid Home Owners Associations like the plague.

An internet classic, Squirrel vs. Penguin. Probably not what you were expecting, but a delight anyway.

The prettiest time-lapse video of a city in the fog you'll see today. Vancouver City is a nice song as well.

Movie posters and video game titles. They go together so well!

The sex scene from Back to the Future. It was cut from the final movie after it ripped the space-time continuum.

The Best Neuroscience Study Guide Ever (Because It Has Cats). And a sparkly title and lots of sweet sugary cuteness along the synapses. (via Metafilter)
Posted by Miss Cellania at 2/12/2010 06:06:00 AM