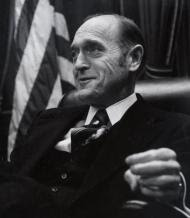 William Wayne Justice wasn't in history texts when I was in school, because the history he was involved in was news at the time. He deserves to be in those texts today, so future generations can know as much as I've learned today. Judge Justice served on the bench in Texas for 41 years until his death Tuesday in Austin. Texans once sported bumper stickers that called Justice the "most hated man in Texas." President Lyndon Johnson appointed Justice to the federal bench in East Texas where he used his power as an activist judge to help those who were least able to help themselves.

His legal compassion forever changed the lives of millions of schoolchildren, prisoners, minorities, immigrants and people with disabilities in Texas. He ordered the integration of public schools and public housing. He outlawed crowding, beatings and inhumane medical care in prisons and youth lockups. He ordered that community homes be provided to people with mental disabilities who were living in large institutions. He expanded voting opportunities.

And that was just the tip of the docket.

Justice also changed the landscape of public education. He ordered education for undocumented immigrant children and bilingual classrooms. And, back in the nonconformist hippie days of 1970, he ruled that bearded and long-haired students, including Vietnam veterans, had a right to attend public college. "I held that that was silly," he said in June 2009 while reminiscing about the old Tyler Junior College rule forbidding long hair on male students.

Judge Justice pushed Texas kicking and screaming into the 20th century. He endured death threats, political opposition, and social ostracism, but never even had an unlisted phone number. In later years, he received many honors and awards for his work. He will be missed. (via Metafilter)