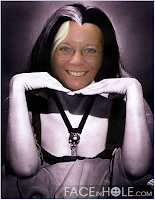 Everything you wanted to know about vampires but didn't know who to ask.

Hell hath no fury like a woman scorned. Especially if she's a cat.

No matter what zoo patrons expect from animals on display, some are not going to fit their expectations. A wise zookeeper would respect that, for his own good.

Salvador Dali taking his anteater for a walk.

Terminator 2, told in only nine minutes thanks to a hip-hop narration. Admittedly, it's easier if you've already seen the movie, but who hasn't?

The 8 Manliest Images on the Internet. Trying to outdo these could be dangerous, or even lethal.

Terry Tate, Office Linebacker. The kind of guy every office needs to keep productivity up.

DIY Halloween Decorations. Creepy displays that will make your party the scariest on the block.
Posted by Miss Cellania at 10/27/2009 07:48:00 AM