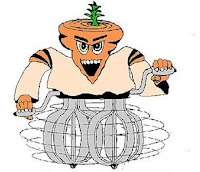 31 Unbelievable High School Mascots. My favorite is the Arkansas School for the Deaf Leopards.

Neighbors at war, part one and part two. Something is seriously wrong when a person thinks they can force someone else to move lawn chairs out of their own backyard.

This crazy dream may give you nightmares. Or it might just give you a few laughs.

Choose Your Own Apocalypse. Select your favorite scenarios out of 144 possible ways for America to collapse, and compare your picks with those of other people. (via Boing Boing)

Guess the Google. From the images shown, can you guess what the search term was? (via Bits and Pieces)

Before he died, actor Heath Ledger was directing an animated music video for Modest Mouse's song “King Rat”. The video has finally been completed.

In theaters now: Gotta Dance. Finally, a film that captures the adventures of a bunch of sexy senior citizens trying out for an NBA hip-hop dance team.

Charles Nelson Reilly, the new song from Weird Al Yankovic. Watch out Chuck Norris, you have competition!
Posted by Miss Cellania at 8/06/2009 06:13:00 AM