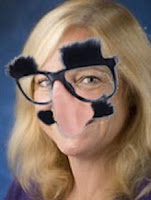 In case you missed it, this site is now four years old! The celebration post, with a heap of videos, is at Miss Cellania. Jonco made the picture for his anniversary greeting.

A western tale dramatized entirely by monkeys. And a dog named Plastic.

How to defeat your toddler using karate techniques. The farce is strong with this one!

Due to there being an unprecedented twelve coffee cups needing to be cleaned in the sink at work, it is understandable that Shannon would be outraged by this intrusion on her facebook and looking out the window time.

Raptors have dreams, too. (via YesButNoButYes)

The Top 20 Jewish Comedians of All-Time. Plus the chance to vote for your favorite.

Shitmydadsays is a Twitter feed of the things Justin’s dad says. It’s a hoot, but NSFW. (via Buzzfeed)

British police politely asked the Climate Camp to advise them of their schedule and locations so they can be there to protect and serve. Climate Camp replied with an equally polite video explaining that the answer is no. (via Boing Boing)
Posted by Miss Cellania at 8/26/2009 08:55:00 AM