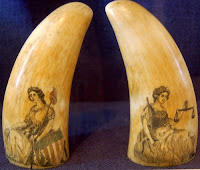 Combine bored sailors, a long voyage, and seven-pound teeth, and you get a new art form. Read how scrimshaw arose from the whaling industry.

Love in the Time of Leprosy. A true tale of life in an American leper colony.

The real story behind the Little House books. The children's books don't hold a candle to the dramatic real lives of the authors.

The Texas Library Association is selling a 2010 calendar called "The Tattooed Ladies of TLA," featuring 21 inked librarians. It's a fund raiser to assist libraries that are still recovering from damage caused by hurricanes Katrina and Rita.

On the Trail of a Serial Killer in Macedonia. It took years for anyone to realize there was a pattern of missing women and start looking for the Kičevo Monster. (via Metafilter)

Cahokia, the ancient city on the Mississippi where St. Louis is now, flourished in the 12th century and was an center of commerce. Archaeologists are also finding evidence of human sacrifice, which flies in the face of conventional wisdom about Native Americans.

An atmosphere made of titanium oxide? The Kepler Space Telescope is showing us how very different planets outside our solar system can be.