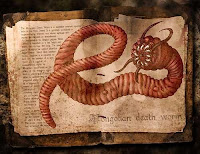 In Search of the Mongolian Death Worm. Reported to be between two and five feet long, the deep-red coloured worm is said to resemble the intestines of a cow and sprays a yellow acidic saliva substance at its victims. Yeah, right.

5 People You've Never Heard Of Who Saved the World. Most never got any profit from their actions, either.

Leonardo, the mummy dinosaur, will be presented to the public next week. Meanwhile, scientists are studying his guts to see what his last meal might have been.

How and When to Cancel a Credit Card.

Read personal stories of Texans surviving Hurricane Ike, including the group of people who took shelter in a church along with a full-grown lion.

Instruments Not Found in Your High School Orchestra. Unless you are determined to field an orchestra with no budget.

Have you ever seen a giraffe sleeping? It's a strange site, as you'll se in this article about animals' sleeping habits.

Pictures of the Texas coastline before and after Hurricane Ike. Where did all those houses go?
Posted by Miss Cellania at 9/18/2008 10:29:00 AM