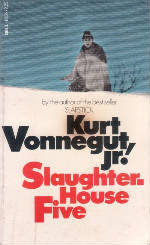 Before he was a noted author, Kurt Vonnegut was a POW in Nazi Germany. In this 1945 letter to his family, he relates the experiences that would become Slaughterhouse Five.

The Gospel of Judas rocked the biblical world a couple of years ago, but the story behind the discovery, translation, and interpretation is as riveting as what the text itself says.

Extreme microbes have moved in to clean up a pit of toxic waste even the EPA's Superfund can't deal with. These species may even have the power to cure cancer.

Top Ten Things Kids Stick Up Their Noses. (via Bits and Pieces)

What is Guerrilla Marketing? An overview with links to a highly informative eight-part series.

20 Deadliest Plants on the Planet.

Excavations at Ferry Farm in Virginia have turned up the foundation of George Washington's boyhood home. Half a million artifacts have been uncovered and are being studied for clues about Washington's early life.

I've followed Jacek through two blogs already, one when he was presenting himself as a New York party boy and another which chronicled his journey to an MBA. Now he has a new one called Next Up.

Carl Zimmer and his blog The Loom have left Scienceblogs and is now blogging at Discover Magazine. He still maintains his auxiliary blog, Carl Zimmer's Science Tattoo Emporium.
Posted by Miss Cellania at 7/03/2008 11:11:00 AM