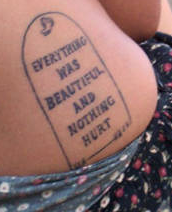 Literary Tattoos is a blog documenting tattoos from books, poetry, music, and other sources. (via Look at This)

"I ran into US graffiti artist Broken Crow at the Cans Festival earlier this year. I jokingly
suggested that next time he was in the UK he might want to paint my house. Didn't expect him
to agree." (via b3ta)

In search of the magical penis thieves. Belief in penis theft dates back thousands of years in Asia, but is still a problem in parts of Africa.

8 Crazy Stories From The ER. The medical cases with images are not for the squeamish, but they will make you feel healthier and more responsible by comparison.

It's Lovely! I'll Take It! is a blog featuring "A collection of poorly chosen photos from real estate listings. With love." (via Metafilter)

Roadsign Romance. (via Look at This)

A performance on the Russian Bar, recorded for Chinese television at the Circus Festival of Monte Carlo. The final stunt is unbelievable!

Drivers are crazy on the streets of New Delhi, but not many are as crazy as a guy text messaging while reclining on a motorcycle in traffic!

12 Extremely Weird Diseases and Conditions You’ve (Probably) Never Heard Of. I’ve heard of most of these, but I’ve been called extremely weird myself.

Indiana Jones and the Kingdom of the Crystal Skull: The Abridged Script. Full of spoilers, rough language, and laughs.
Posted by Miss Cellania at 7/14/2008 07:28:00 AM