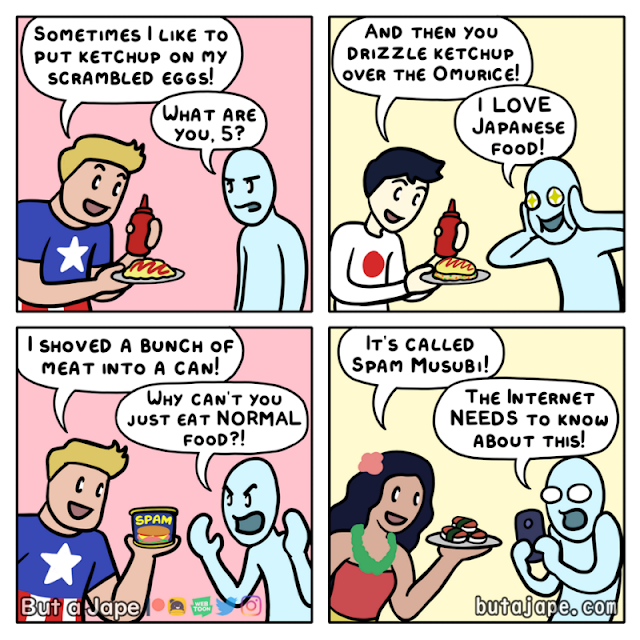 It's hard to appreciate "American" food. Some people don't even recognize American food outside of a Thanksgiving feast, because we've always taken cuisine from immigrants and made it our own. But don't knock it until you've tried it. I'd say the same about food from other cultures. You're going to like some of it and hate some of it, but either way there's no reason to put down people who eat it. This comic is from But a Jape. You'll find more commentary at the link. (via reddit)
Posted by Miss Cellania at 9/29/2022 12:00:00 PM

I visited the SPAM Museum in Austin MN at one time, and learned that SPAM is a huge seller in many overseas markets, especially Korea and Japan, and it also sells quite well in Hawaii.  I was told the reason for this is that when US GIs were stationed in these far-flung locations during WWII and afterwards, SPAM went with them and was shared the locals, who took a liking to it bordering on mania.

I've always had a big interest in WWII. When I was a kid I remember telling my dad I wanted to try some SPAM. OMG - thought he was gonna die 1st from schock, then from laughter. But he got me some. Never touched it again - till 50 years later when I had SPAM Musabi. It originated in Hawaii and it's awesome. Hawaiians do love their SPAM and they do some pretty amazing things with it.

And I put Salsa Picante on my scrambled eggs, never ketchup - yechh

I only use ketchup on three things: french fries, meat loaf, and black-eyed peas. Since I live alone and don't cook any of those things at home anymore, the ketchup in the refrigerator is years old and should be tossed.

Now Miss C, if you don't cook, how do you eat? Uber eats? Dominoes Delivers? Please don't say anything with 'microwave' in it. A meatloaf is one the greatest comfort foods of all time. So easy too. I say it's time to treat yourself

gwdMaine, I'll agree with you that meatloaf is a great – nay, the quintessential comfort food (unless it would the home-made, simmer-for-most-of-the-afternoon spaghetti sauce my mom used to make, the recipe/formula for which she took to the grave with her).

But to make it THE perfect comfort food, it must be served TO you, not made on your own, so that your only concerns are
1) to clean your plate and
2) to worry whether or not there are seconds.

And it must come with whipped potatoes, plenty of dark brown gravy, and sliced carrots.

Eating without cooking is easy when you live off sandwiches, salads, and cereal. I will occasionally warm up leftover takeout.

But let's be reasonable. I said I don't cook THOSE things, because they aren't worth making for one person. I do cook things that can be made in small batches. Meatloaf is a method for stretching meat to feed a big family, and I rarely do that anymore.