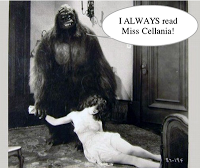 The Real Zorro? How tales of the bandit Joaquin Murrieta put on a mask and became a pop culture staple.

Tips are taxable, but gifts aren't (up to a point). So what if we gave waitress gifts instead of tips?

Edward Gorey was a masterful storyteller and artist, and he was also a collector. Not of anything in particular that he could become an expert on, but everything.

Rethinking Critical Thinking With the Help of Carl Sagan. One place to start would be Sagan's "baloney detection kit."

Although Less Deadly Than Crinolines, Bustles Were Still a Pain in the Behind. Get a look at both and be thankful you live in the 21st century.

A father turned two Cozy Coupes into Mad Max: Fury Road vehicles for his children. They are now the coolest toddlers in Glendale.

Aristocrats of the 18th century were always on the lookout for something new and impressive to spend money on. For some, that meant hiring their own hermit, to entertain guests and to, let's say, outsource their interest in philosophy.

Build a Better Monster: Morality, Machine Learning, and Mass Surveillance. How technology outruns morality because of of money. (via Metafilter)

Stop Worrying That You Worry Too Much.