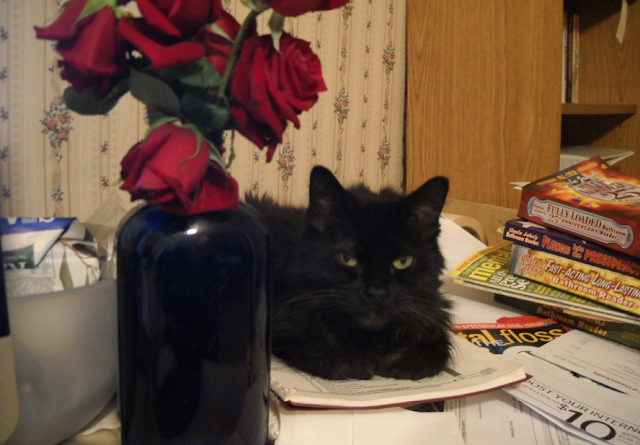 In the summer of 1999, someone left a litter of kittens in the parking lot at the radio station where I worked. We thought they were all gone by the end of the day, but at midnight, I found one that had hidden in my car’s wheel well. I took her home. She was lame, so my husband perversely named her Gogo. The lameness was temporary, and she grew to be a sweet cat who never took a decent picture because of Black Dog Syndrome. Last year we realized how old she is and took a “then-and-now” picture with Princess, who was two years old when Gogo came to us. 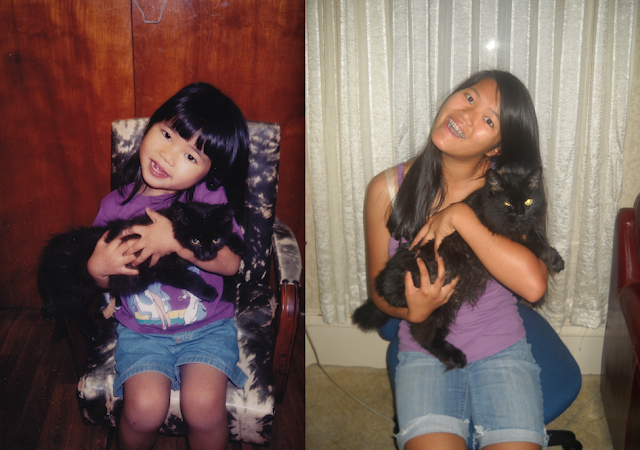 She’s had some physical problems this year, matted hair and an infection, which the vet took care of and said her kidneys were in good shape for her age. She’s always been skinny, but lately has been losing more weight. We have been giving her senior cat food and all the treats she wants (cheese being her favorite), but although she ate constantly, she got skinnier. I started preparing myself for her passing.

Thursday, it looked as if she’d been crying. I wiped her eyes and snuggled her for a long time. She did not seem to be in pain, though, and even purred. At seven that night, I let the cats out. Gogo doesn’t go out much, only when its warm, and she never leaves the deck unless I’m out in the vegetable garden. But she strode outside without hesitation, proudly, even, so I smiled. At eight, the cats all know its time for Fancy Feast. Three of them were waiting to come in, but not Gogo. She wasn’t on the deck. She didn’t answer when I called. I took a flashlight and searched around the house, in the garden, under the cars and the porch, through the junk in the carport. The other cats went along, but were no help. No Gogo.

I checked the back door -and front door- every hour or so all night. Looked again Friday in the light. Walked the neighborhood. Check the river bank. Asked the neighbors. This is just so unlike her. She wasn’t even healthy enough to wander off, and it was a cold night. Of all the scenarios I imagined of how I would say goodbye to Gogo, this was one I never considered, that she would just… disappear. Maybe something inside told her it was time to go on an adventure. 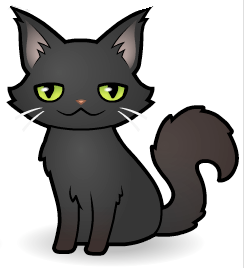 I remember how she was so patient with my daughters when they were little and not so gentle with cats. I recall how she sat in the laundry room and cried out loud for months after my husband died. I think about how she was so delighted when Biscuit joined our family, and fairly tolerant with each new kitten thereafter.

Man, I loved that scrawny little cat. It's just too weird to go into the kitchen and not see her monitoring the food dish, in case it gets just a tad low. Or looking at me expectantly if I get sandwich meat or cheese out of the refrigerator. Or wanting to be lifted into my lap while I'm at the computer.

losing a cat is uber rough

I'm so sorry! We get so attached to our animals and when it's time to let them go, it's very painful.

I'm so sorry to hear this, sometimes they rescue us as much as we rescue them. I suspect she was happy to choose her own way at the end.

We just lost our cat the same way. He just went out one morning and never came back. Thanks for sharing your loving story. It makes me feel a little less alone.

Damn it. But a noble end to a noble friend.

I am very sorry! We almost lost an old Tom a couple of weeks ago. We were trying to nurse him while thinking the worst because his is very old.

I am very sorry! We almost lost an old Tom a couple of weeks ago. We were trying to nurse him while thinking the worst because his is very old.

Aww, so sorry to hear this. Sounds like there was lots of mutual love and support.

Gogo looks almost exactly like my old cat, Samson. He also had a problem with matted hair when he got older. He loved to go outdoors, though, and lived 21 years.

Almost 20 years later, and I still miss him!

I'm so sorry for your loss. I know how difficult it is to lose a beloved pet who has been part of the family for such a long time.

Both of my cats are 17. Sophie, who like Gogo has always been skinny, has also stopped going outside, because it's just too scary out there, although she was an avid hunter for many years. She slipped out one day when I had workmen in the house and didn't come back that night or the next day. Although I knew I had given her a good life, it was so hard to accept that it was going to end with her not being at home. I put up flyers all around the neighborhood and at all the local vets and pet stores and went to animal control to look for her. All the neighbors were looking for her and calling me with potential sightings, but it was never her. The local Trap, Neuter, Release lady called to say that there was a feral male who looked just like Sophie from a distance, so that was probably why I got so many false alarm calls. The TNR lady called on the sixth day she was gone, and there had been so many stormy nights in the interim, so the lady tried to let me know that she was probably gone, especially because she had vomited a few times on the day she left. I sobbed on the phone with that lady and knew that there was no hope left.

And then on the seventh day, Sophie came home. She ate a little, drank a little, took a little nap, and just went back to her normal old lady cat life. I'm not saying you should hold out hope, I'm just saying that with cats, you never know. And they won't tell.

Sorry about your cat, but I do admire her choice of reading material (Uncle John's Bathroom Readers and various back issues of Mental Floss) as shown in the first picture.

Thanks for the kind words, everyone.

Spellucci, I am so sorry.

Sandy, I would be so delighted if she came home! But then, knowing her age and condition, I'd just have to go through mourning twice that way.

Oh, I'm so, so sorry. It's terribly difficult to lose them. I do know.