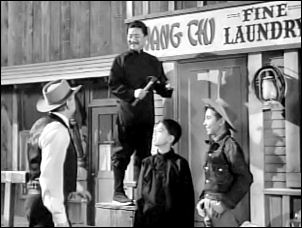 This morning my husband was watching The Rifleman on TV, while I heard the dialogue in my office. The show did its best to showcase morality tales as Lucas McCain imparted life lessons to his son. This episode was about discrimination against a Chinese father and son. There was an altercation between the two boys, which came about when Mark McCain compared the newcomer to a girl. Rightfully, he got his lesson in cultural differences and why a Chinese boy of the time period would wear a queue. All was forgiven, and the father was allowed to open a laundry in the Western town. It was a comically gentle depiction of racism, but progressive for its time.

However, looking from the vantage point of 2016, it strikes me how normal it was that being called girlish or anything to do with girls was a genuine insult and worth fighting over. No one in the 1950s and ‘60s questioned that. While delivering a morality tale on discrimination, the show blithely perpetuated another form of it with no thought at all. I well recall those days, and that’s the way things were. No wonder I spent a big part of my childhood wanting to be a boy -not necessarily because I felt like I should have been a boy, or because boys were inherently better, but because boys were held in higher esteem and regarded as normal humans, while girls were some other kind of thing. And that was rarely even questioned.

Glad you pointed that out. I had forgotten how often it happened in the 50s and even 60s. I tried to act more like a boy so that my dad wouldn't be sad that I was a girl. It took me a long time to "enjoy being a girl", in fact, maybe when I heard that song in "Flower Drum Song". It finally occurred to me that there were definite pluses to being a girl. I'm glad things are changing a bit, though very slowly as we watch Hillary get beaten down over and over again-----and watch her get right back up again! Over and over and over.

I hear you sister. I was born in 1961 and was so irritated about things I couldn't/shouldn't do because I was a girl. I have recently gotten into powerlifting and it is so empowering to lift heavy things and have people cheer you on and not patronize you!