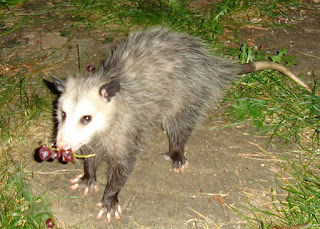 My husband has been talking about installing a cat flap so we don’t spend all our time letting the four cats in and out. I am wary of cutting a hole in the house, so we compromised and got a fabric mesh screen for the back door. So this summer, we left the back door open for the cats except during the hottest part of the day.

The cats made friends with a new Siamese cat in the neighborhood. Occasionally I would find the cat in the kitchen, eating cat food. I would chase it out, proclaiming “You don’t live here!” The cat got bolder. My daughter called me upstairs to help her with a “critter.” I’ve helped her chase birds and bats out, but she thought there was a possum under her bed. No, it was the Siamese cat. How did a cat who is afraid of us make it upstairs?

My daughter then left for college. I took a bag of garbage out one day and spotted a small possum in the garbage can. He did not want to come out. I had to dump the entire can on its head to get him out, while my cats gathered around to watch. Did they chase the possum off? No, they followed him under a vehicle to watch. Apparently, they made friends.

Not long afterward, I walked in the kitchen at night to find the possum eating cat food! I chased it out, and scolded the cats. I didn’t want four cats in the first place, so you’d think that at least one of them would try to make sure the house was vermin-free. That’s when we discontinued the open door policy. I started shutting the back door at night as well as the afternoon. I still left it open for a couple of hours during morning and evening.

However, there were two mornings when I discovered that the possum had sneaked in before dark and stayed in all night. “You don’t live here!” If you’ve ever dealt with a possum, you know that it would rather hide than run, so it was not easy to get him to go outside, even after being shut in overnight. From then on, the door was only opened when one of us humans was standing there. That was about a week ago. No one entered or left without us seeing. 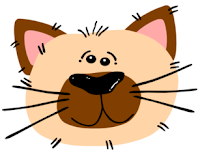 So last night, I heard some infernal yowling in the laundry room (where the back door is). It was the Siamese cat! I opened the back door and approached the cat, who, instead of running out the door, ran back through the kitchen and up the stairs! The only way that cat could have been inside was …she’s been in here for a week. There are two empty beds and a  litter box up there, and I don’t go upstairs any more often than I have to. She could have easily sneaked downstairs to eat at night. And now she was surprised and frightened to find the door was closed.

I got my husband to hold the back door open (lest a possum come in), and I chased the cat out from under a bed upstairs. The cat ran downstairs, into the living room. When I flushed it out, it ran back upstairs. I chased the cat down a second time, and then blocked off the stairwell with a piece of paneling. I yelled “You don’t live here!” I swear the cat meowed, “But I do!” The cat ran to the kitchen, but took a right turn into the pantry and hid behind a Dutch oven. There’s barely room to stand in there, much less chase something. I ended up throwing a towel over the cat and pulling her out, while she desperately clung to the shelf.

We managed to get the cat outside, so now we are down to four cats again. And no possum for the moment. But the laundry room smells like terrified cat pee.

I don’t think we are going to install a cat flap.

Assuming all your cats are chipped, You can get a configurable cat flap that only let your cats in. I have no experience with them, as our six cats are indoor cats.

That's an intriguing idea, but I'm still wary of cutting a hole in the house.

My daughter has two dog, one a pit bull who doesn't know he's a pit bull, and another who's much bigger. We're not sure what he is, other than very sweet and very dumb. They have a doggie door, of necessity quite large, but with those two around, critters don't survive to get to the door. Cats aren't going to police the area (as they have proven), so yeah, you're just going to have to get up and let them in and out.

This is too good not to share. Being sent to Georgia Dunn (worthy of a few strips) and shared on Facebook.

I had a pet door installed three years ago and I love it. The dog and one of the cats both use it, although it took a lot longer to teach the dog how than it did the cat. The other cat has realized she's too old to go outside any more, so she refuses to even try it. I can still put the cover on without latching it and while it doesn't even slow down the cat, the dog can't figure it out. We haven't had any alien intruders, but that's probably because the dog is pretty vigilant about patrolling the backyard.

It shouldn't be an issue, as there should be no flap, as for many reasons, cats do not belong outside. Ever.