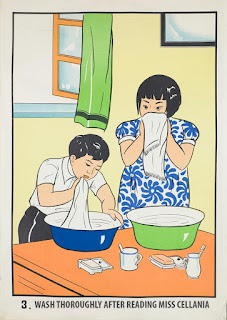 The Beatles and The White Album. Eddie Deezen tells the story.

The Art of Speaking Like Donald Trump, in 10 Easy Steps.

Why Did an Ex-Amish Family Sell Their 14-Year-Old Daughter? Plus their nine younger daughters.

Dain Yoon, a Korean college student, uses face paint to create astonishing optical illusions. The military should hire her to design their camouflage.

The Rocketeer at 25: An Adventure Movie Out of Time. Although it was set in the past, it was ahead of its time.

Inside the Troll: The Science of Being an Awful Person.  But why are there so many of them?

If You’re Younger Than 31, You’ve Never Experienced This. The last time the global monthly temperature was below average was February 1985.

The Emile Berliner Musée des Ondes in Montreal is dedicated to preserving the memory of early sound recording and aerospace engineering. That seems a weird combination, until you learn a little bit about electrical genius Emile Berliner.