Links for Fun and Enjoyment 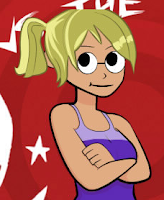 The next time someone criticizes you, calls you a failure, or just says “FAIL”, tell them that if you’ve never failed, you’ve never lived.

Imagine that: a website dedicated to the movie TRON has named a sexual position the Neat-o-rama in honor of the website.

Randall Munroe of xkcd updated his 2007 map of online communities. In the new map, you’ll see jokes like Facebook’s privacy controls isolated in a pool of lava, and a meteor crater where Craiglist adult services used to be. (via Metafilter)

Jess Bradley’s Rather Odd Alphabet contains unforgettable alliterations and illustrations. My favorites are the abandoned astronaut and the malodorous mudskippers.

I love this Rube Golberg-inspired installation at the St. Louis City Museum. Now I want to build my own machine that does a lot of nothing in particular!

The Most Beautiful Girl in the Lab. The perfect woman: she’s a scientist, she looks good enough to be a sales rep, and she’s got a pipette!

Simon’s Cat meets a porcupine. As usual, he has his own self-serving agenda.