Good Reads and Stuff You Should Know 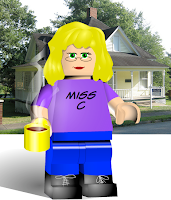 Preview the new NatGeo Amazing! book and maybe win copy of your own from Neatorama!

At one time, the 6 Worst Jobs Ever were done by children. See, they didn't know any better and didn't have the power to quit. NSFW text.

Richard Nixon: The Shy Guy. He went from a fearful and awkward child to a paranoid and awkward politician.

The Curious London Legacy of Benedict Arnold. An American historian paid thousands of dollars to have a proper grave marker for the notorious Revolutionary War traitor.

Take a walk down the uncanny valley with Bina48, a robot designed to be a "friend" with conversational skills. New York Times reporter Amy Harmon interviewed the robot itself (or is it "herself"?) to see how conversational she really is.

LBJ: The President Who Marked His Territory. And those around him felt obliged to respect his dominance, like it or not.

Happiness and sadness spread just like germs. Be careful what you spread, and what you expose yourself to today, OK?

Altered animals: Creatures with bonus features. I'll take a pre-plucked chicken and a glow-in-the-dark kitten, thank you. (via Boing Boing)
Posted by Miss Cellania at 7/16/2010 06:07:00 AM