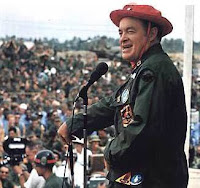 Watch Bob Hope's Christmas USO tour of Vietnam and surrounding bases in 1967. My family watched these every year, feeling so sorry for those boys spending Christmas so far from home fighting a never-ending war.

Seven Psychological Principles Con Artists Exploit. Now, are you going to use this knowledge to protect yourself or to set up shop? (via Kottke)

Controversial Quotes From 8 of History's Most Revered Heroes. Some are "rare slipups", some are signs of the times, and some give a glimpse into the hidden parts of a personality.

Fixers, feeders, and the strange, hidden world of feral cats. Should tens of thousands of ownerless cats in Denver be destroyed or neutered?

National Geographic's Ten Most-Watched Videos of 2009. Look carefully in case there is one or two you may have missed.

Keeping in mind that colonies of people may be traveling together for hundreds of years, what sort of governance should we carry to other planets? Many people respond with thought-provoking ideas.

The world's fastest animal takes New York. In 40 years, peregrine falcons went from the brink of extinction to a penthouse perch on the Empire State Building.
Posted by Miss Cellania at 12/15/2009 09:02:00 AM