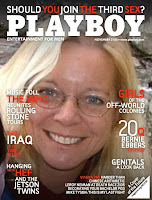 I'm on a Mac. NSFW language.

Starbucks launched their campaign against AIDS in Africa by putting together singers from 156 countries in one video performing "All You Need is Love". Kind of like "We Are The World" with less ego and more world.

Luxuriant Flowing Hair Club for Scientists. For those who are too busy thinking about how the world works to get a haircut.

In this episode of Shimura Zoo, Pan-kun the chimpanzee must pick up and deliver a cake. It's not that simple! (via Random Good Stuff)

A Statistical "Proof" of the Odd Even Star Trek Movie Rule. If you are going to watch only one, make sure it's an even numbered film. (via Evil Mad Scientist Laboratories)

Never A Year Like '09. Jib Jab puts all the silliness of the past year into one animated video, like they do every year.

The Ultimate List of End-of-the-Decade Lists. This should keep you busy for, oh, about a year!