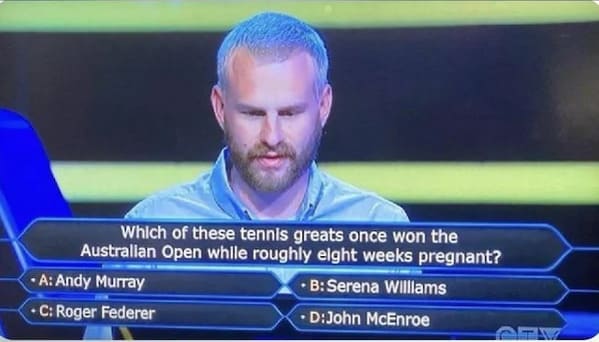 In a culture of "pregnant people" and "not just females menstruate" the answer might not be as clear as it once was...

If John McEnroe, Andy Murray, or Roger Federer had ever been pregnant, we'd have probably heard about it.

Maybe he never follows pro tennis and is trying to remember whether Andrea Murray uses the shorter name professionally.

Or, maybe he's thinking "what's the trick? this has to be a trick question… nobody could genuinely be that stupid…" I would think that.

The trouble is, nowadays you must simply never, ever think "nobody could genuinely be that stupid" because nowadays somebody not only could be, but could get elected (or get their own show) on that basis.