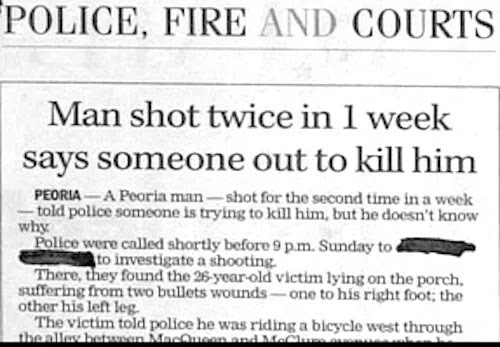 Shot twice within a week, suspects someone is trying to kill him.  Gee, d'ya think so?

Maybe they aren't trying to kill him, but it's a safe bet that there's someone out there who doesn't like him much.

Maybe he should think twice before fooling around with married women...just sayin'

I'm not finding any name of the victim (other than "Rob") or resolution to the second shooting, but the first has been adjudicated.

"Louisville Metro Police say they've arrested two men (Name 1, age 18 and Name 2, age 19) who robbed a man, shot him, then left him for dead -- but he survived.

According to arrest reports, the incident took place just after midnight on Thursday, Jan. 12, at an apartment near the corner of S. 28th Street and W. Chestnut Street.

Police say two men showed up at the victim's apartment and robbed the man at gunpoint, taking his phone.

After the robbery, (Name 2) shot the man, according to police.

Both men believed the victim had died as a result of the shooting."

(Name 2) was tried in December of that year, imprisoned until April of 2018, and completed his parole.

Other dude had a previous record (had been arraigned on robbery and assault charges 8 days before this crime) and is still in prison after being convicted of 5 class C and D felonies -- three committed after he was convicted of Robbery, 2nd degree and Assault, 2nd degree for the January 12 incident.