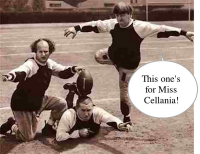 Giving Thanks For Thanksgiving Turkeys. If you're going to eat turkey the rest of next week, you may as well know something about the birds.

In the game Furiosity, the object is apparently to turn all the blocks into a different color. It only begins to get difficult about level four, and then it gets very difficult for further levels. (via the Presurfer)

Most Parents Worry About Kids’ Online Privacy — but Aren’t Doing Anything about It. However, they will ask to be their kids' "friends" on Facebook.

Fiona Apple is postponing her South American concert tour to be with her dying dog, Janet. Her message explaining the decision will make you run for the tissue box.

Why you should stay home on Black Friday. Mainly because leftover turkey with your grandma makes a much better memory than fighting for bargains on stuff you don't need.

Chubby Babies in Space! Chinese propagandists of the '60s, '70s, and '80s knew what would grab attention for their aerospace research program.

While our Thanksgiving holiday is based on a historical American event, it's not the only holiday for expressing gratitude. Here are Five Other Thanksgiving Holidays from around the world.

Thank you for the article on Fiona Apple. As a dog Mom i have so much respect and admiration for her. We all say our dogs/cats are 'member of the family' but she showed it.