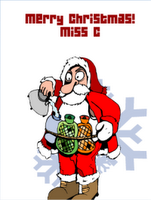 Cahokia, America’s Forgotten City. Hundreds of years before St. Louis was founded, the area was home to tens of thousands of Native Americans who left no stories behind.

If you didn’t catch the solstice lunar eclipse for one reason or another, we have video. I never knew until now that the earth’s shadow is red.

The new Google Cr-48 notebook doesn’t have the standard Caps Lock key you see on other keyboards. Is this the beginning of the end of Caps Lock? Will anyone miss it? (via Bits and Pieces)

Even the people that work on Extreme Makeover: Home Edition are surprised by the generosity of others. Especially those who have every reason not to feel generous.

Parasitologist Susan Perkins started the blog Parasite of the Day to highlight a different parasite for every day of 2010 -the UN International Year of Biodiversity. As the year comes to a close, she’s posting the 12 Parasites of Christmas. (via The Loom)

The Most Heroic Animals of 2010. Read stories of dogs, cats, horses, dolphins, rabbits, and a cow that might leave you a little verklempt. (via Nag on the Lake)

Ancient Robots & Victorian Androids. Leonardo da Vinci thought about them, and people have been building robots of one kind or another ever since.

Sex in space will eventually lead to pregnancy in space, which raises some far-out concerns. How will microgravity affect human gestation and childbirth? (via Metafilter)
Posted by Miss Cellania at 12/22/2010 05:51:00 AM