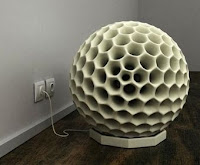 Dust Ball: The Vacuum Of The Future. Or possibly the greatest cat toy ever invented. Either way, I want one!

A finger bone found in Siberia belonged not to a neanderthal, not to a human, but to a previously unknown close relative of both. DNA analysis shows the Denisovans are different, but interbred with humans.

We thought the Coelacanth was extinct until a fisherman caught one in 1938. A museum curator had it mounted by a taxidermist because there was no other way to preserve such a large specimen. (via Boing Boing)

A teenager takes time out every evening to help a family who needs him. But Rudy says he is receiving more than he is giving. (via Metafilter)

Sometime in 2011, there will be seven billion people on this planet. Can our earth support the nine billion people that the projections predict we’ll have in 2045?

Five Fake Memoirs That Fooled the Literary World. Of course, now everyone says they had their suspicions at the time, if not all the answers.