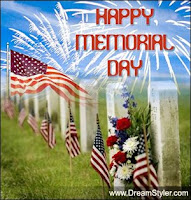 Memorial Day weekend means TV marathons. Here's a list; see if any of your favorites are there to suck up your holiday time.

What Does Your Credit Card Company Know About You? More than you'd suspect, and they use it for one purpose -to get you to pay your debts. (via Boing Boing)

Watch as the galactic center of the Milky Way passes over Texas in this time-lapse video. Luckily for us desk jockeys, the camera sees better than the naked eye.

40 years ago, the Apollo X lunar mission crew named its modules Charlie Brown and Snooopy. Charles Schultz considered his NASA connection one of the highlights of his life.

Facts and discussion on evolution fills many books, but when you condense it down to four basic points, those volumes will be much easier to understand.

Meet Ida, the most complete fossil of Darwinius masillae found in Germany. Some Scientists believe this may be the common ancestor of apes and humans that they've been waiting for.

The High Cost of Poverty. Rich people don't understand that the poorer you are, the more you pay for just the basics.