Wednesday, two and a half weeks after construction began, I finally got the money to pay for it. The loan went in, the materials payment came out, and my first installment is due in a month. According to the building contract, they were supposed to start work today and finish by August, but they are way ahead of schedule. In my last update, we decided to put a gable in the back of the house to make the back bedroom bigger. Since then, the contractor did some thinking (which is a dangerous thing). He came to Mr. Perfect and me and said, "Since we're not leaving the roof intact, why don't we just raise the entire back of the house?" 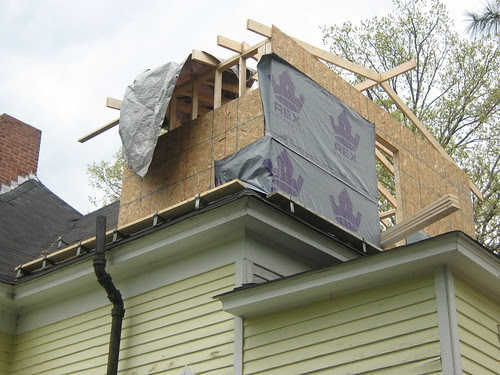 They are doing it in a hurry, between downpours. One section at a time. This will make the upstairs almost as large as the downstairs. Now the "little bedroom" will be as big, or even bigger than the "big bedroom". Uh-oh. Of course, I will put two daughters in the bigger bedroom, but I don't really want one child in a room that big by herself. They are already arguing and competing to see who gets to bunk alone. So I told the contractor I wanted a large linen closet carved out of one bedroom for me to store things. And I want each child to have a closet. So they are going to hold off on closets until I see how big each room will be and adjust plans from there. The TV room will be much larger, too. Mr. Wonderful thinks we should retreat up there ourselves and leave the kids downstairs. I'm tempted.