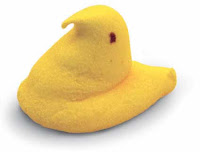 100 Ways to Kill a Peep. This blog doesn't quite have 100 methods yet, but will eventually. (via YesButNoButYes)

An interview with the one and only Afro Ninja!

6 Reasons North Korea is the Funniest Evil Dictatorship Ever. Their attempts to look fabulous more often than not turn out to be downright pathetic.

It's bad enough when someone gets a celebrity tattoo, but it's even worse when no one can figure out who it's supposed to be! Take your best guess. (via Gorilla Mask)

Tension, Terror, and Trouble. You think you know what's going on here until you don't.

The World's Weirdest Keyboards. I don't think you can out-weird the one that comes with rearview mirrors. (via the Presurfer)

9 Good Things The Internet Has Ruined Forever. Overkill will do that, and the internet is all about overkill.
Posted by Miss Cellania at 3/27/2009 10:03:00 AM

Hi, I love your site, but I clicked on the celebrity tattoo link, and my virus software went nuts. :)

I'm sorry. I often don't know about those because I use a Mac. The post is on City Rag, which is usually a good source.