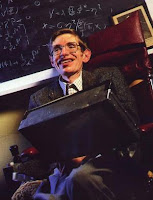 Stephen Hawking writes about life with ALS. His main complaint is that his speech synthesizer speaks with an American accent.

How hate transforms your brain. Hatred heightens your judgment and your ability to assess what other people are likely to do next, while romantic thoughts just befuddle you.

TIME Magazine presents their picks for the 50 Best Inventions of 2008. The home DNA test comes out on top.

Don't call it a "budget", call it a spending plan! Here's how to make a realistic plan you can stick to.

Riff Offs: 10 Songs That Resemble Other Songs. It has to be near impossible to write a song that's completely different from any other song before it.

History of Science presents From Cave Paintings to the Internet. Explore the history of information technology by year or by category. (via Metafilter)

Nebraska is turning into a national dumping ground for unwanted kids. Since a broad law intended to save infants passed, 27 children children up to 16 years old have been relinquished.

The 500 million year old octopus. Fossils of the eight-armed creature who preceded dinosaurs have been found in both Australia and China.

The Road to the Inauguration. Newsweek takes an in-depth look at the secrets of the 2008 presidential campaign in a seven-part series.
Posted by Miss Cellania at 11/10/2008 02:12:00 PM